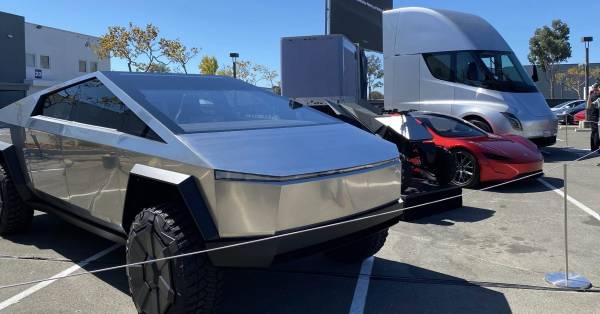 A new survey of searches shows that the Tesla Roadster and Cybertruck are the most popular upcoming electric vehicles despite the delays. You have to go down to fourth place for a vehicle available on the market this year.

One of Tesla’s biggest market advantages is its mind shares in the EV market – when people think “electric vehicle”, they often think “Tesla”. Of course, in some markets, like in the US, Tesla also has some large literal majority market shares, but the automaker often dominates the headline with vehicles that are not even on the market yet.

Now, Lease Fetcher has put together a report on the most searched EV models in the world, and it shows why that’s the case: people are looking for those EVs.

In the top 10, Tesla took the first and second place with the Roadster and Cybertruck despite those vehicles being delayed several times and being called “vaporware” by naysayers:

The Roadster has captivated people’s attention for its incredible performance as well as the SpaceX package, which will supposedly add cold air thrusters to the electric hyper car.

However, the vehicle has been delayed several times and now it doesn’t look like Tesla plans to bring to market before late next year. That said, it looks like people are not losing interest in it based on those search results.

The Cybertruck is in a similar situation. The launch of the vehicle was massively popular due to the vehicle’s polarizing design and incredible specs, but delays have cooled things down. The electric pickup truck is officially planned for the end of the year, but further delays are possible. Tesla is expected to give more details next week during a product roadmap update.

Apple Car, which is also a vehicle that has vague production plans, takes the third spot. Not much is known about it beyond that Apple wants it to be electric and autonomous.

You have to go all the way down to the BMW i4 in fourth place to find a vehicle that is going to make it in the hands of customers this year.

What other EVs you are excited about that you are surprised are not in the list? Let us know in the comment section below.