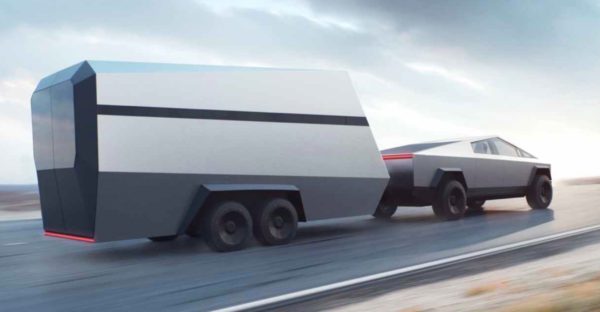 Tesla CEO Elon Musk is on a roll with more announcements about the Cybertruck today.  He described a “towing calculator” which will show all kinds of real-time stats to help drivers know more about what their vehicle can handle while pulling a big load.

Earlier today, Musk noted that the Cybertruck would be a little larger than previously announced, at 82″ wide rather than 80″.  This is close to what was expected, but smaller than the 84″ body width at unveiling.

He also stated the truck will “come standard with upper laser blade lights” – the lights across the top of the windshield which we’ve seen in a few photos – and that it looks “slightly better” than at the unveiling (which is welcome news).

But apparently that wasn’t enough Cybertruck announcements today, because Musk continued by describing a bunch of improvements that the Cybertruck will have to make towing easier.

When asked whether the truck will have a payload/towing calculator, Musk said it would come with all that and more:

One of the reasons Cybertruck has such large battery options (~250, ~300 and ~500 miles) isn’t just because people need to drive 500 miles in one sitting (they don’t), but rather because towing has a big impact on vehicle efficiency.

This is true in any car – when you’re towing more weight, have more rubber in contact with the road, and when you have more wind resistance from a large trailer behind you, these are all going to result in reduced efficiency.  Gas trucks get much worse mileage when towing, and the effect of simple physics will be approximately the same in an electric truck.

So the tri-motor AWD Cybertruck with ~500 mile range option will get significantly less range than that when it’s loaded.  Add in a long upward grade and you’re going to use a lot more energy than usual.

Since increased weight affects vehicle dynamics in so many ways, Tesla wants to give drivers access to information about how this affects their truck in real time.

Tesla’s navigation already calculates some of this – the “energy” tab shows drivers how much energy they’re consuming and how their range has changed over the extent of their trip.  If you have a route entered into the system, it will route you through superchargers and tell you if you’re driving too fast to make it to the next one.  Driving slower increases efficiency, so if you’re on the borderline of range to get to your next charging stop, your Tesla will tell you that you need to slow down to get there.

It looks like this software will become much more complex with the Cybertruck, taking into account elevation changes and loss of efficiency from whatever you’re towing.

We don’t know if Tesla will have sensors to try to judge the weight and possible drag effect of your cargo or if they’ll just use generic estimates or have drivers enter that information in themselves, but it sounds like they’re looking at some pretty great ways to improve the towing experience that nobody has ever really done before.  As usual, Tesla is leveraging one of their biggest advantages: software.

Much of Tesla’s software – like the automatic routing through Superchargers – has been designed to help reduce feelings of “range anxiety” in owners.  Longtime EV owners generally understand their vehicles and don’t get this feeling anymore, but new owners are often antsy about running out of charge.

Tesla adding this software to the Cybertruck should help ease any fears about this among new owners, or among people who don’t tow weight very often and aren’t sure how it would affect their driving dynamics.  And if it needs to be tweaked with data from user experiences, Tesla will be able to do that with over-the-air updates.

This towing software might even help make driving with a large load safer.  Musk says the software will even tell you changes in max acceleration and cornering ability…but we would encourage people not to push those limits when towing a large load.

At the unveiling we got a glimpse of Tesla’s new user interface for the Cybertruck, which looks very different from other Tesla interfaces.  Despite a similar screen size and orientation, it’s drastically different from the Model 3’s UI.

We don’t know if this UI will make its way to the Model 3, or even if the final Cybertruck UI will look anything like this, but it definitely shows that Tesla is thinking about how to change the UI to better aid Cybertruck owners.  Or at the very least, to match the cyberpunk style of the truck.

But it seems like that UI will include some big differences from the Model 3 UI, with this towing calculator being a particularly interesting one.