Tesla Cybertruck UI patent hints at new accessories, features, and even up to 610 miles of range 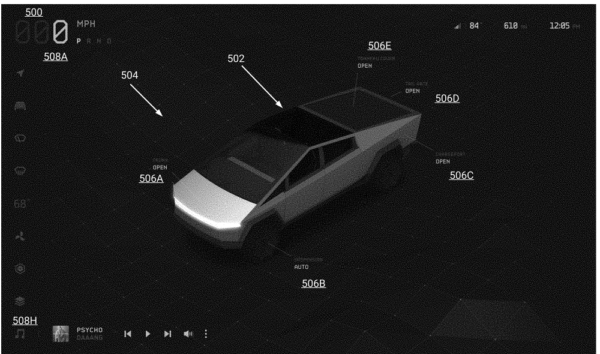 A new patent application for the Tesla Cybertruck user interface has revealed a bunch of potential new accessories, features, and even a range of up to 610 miles for the electric pickup truck.

Last month, we reported on Tesla’s head of user interface leaving the company and leaking a previously unseen look at the Cybertruck UI in his new portfolio.

It was the best look at the Cybertruck software that we had seen at that point, but now we get an even better one, thanks to a new patent application from Tesla.

The automaker applied for a patent called “Context Sensitive User Interface For Enhanced Vehicle Operation” in which the automaker used a ton of screenshots of the Cybertruck user interface.

Here’s an example of the Tesla Cybertruck UI in the patent application:

The most interesting piece of information in the images is the fact that it is consistently showing a range of 610 miles (982 km) for the Cybertruck.

When Tesla unveiled the Cybertruck, it announced that the top performance version would have a range of “over 500 miles.”

Therefore, it’s not impossible that it could end up having 610 miles of range, but that would be a very optimistic look at the electric pickup truck.

The UI images also give us a look at possible new Cybertruck accessories, like this deployable camper kitchen:

CEO Elon Musk already said that the Tesla Cybertruck is going to be offered with “sick attachments” and accessories.

The Tesla Cyberquad, an all-electric ATV, has already been confirmed as an option for Cybertruck buyers, but a trailer specifically designed for Cybertruck has also been rumored.

In the new patent application, the images show the user interface of the Cybertruck in towing mode with a trailer:

In one of the images, it references towing a trailer of up to 20,000 lbs, which is about twice the announced rated towing capacity of the Cybertruck.

Here are a few more images of the Tesla user interface for the Cybertruck in the patent application:

It’s unclear if any of those specs are potentially the ones Tesla aims to achieve for the production version or just random specs for the user interface design.

Tesla aims to bring the Cybertruck to market by the end of the year, but it has indicated that deliveries could slip to 2022.

The electric pickup truck starts at $40,000, but the base version is coming later. Tesla is going to start deliveries with the dual motor and tri motor versions of the vehicle, which start at $50,000 and $70,000, respectively.