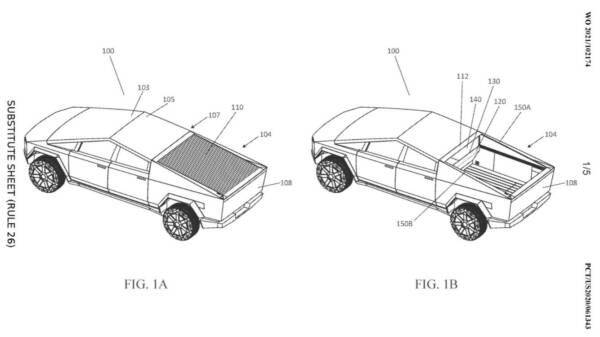 Tesla’s plan for a retractable solar bed cover on its Cybertruck electric pickup truck has been revealed in a new patent application.

After the launch of the Cybertruck, CEO Elon Musk surprised many when he said that Tesla’s new electric pickup truck will have a solar roof option that will add 15 miles of range per day.

It was surprising because several automakers, including Tesla, had previously explored adding solar on electric vehicles before, but most projects haven’t come to production or provided any significant power.

They either only power auxiliary features and not the actual powertrain’s battery pack, or they only provide a few miles of range per day.

In 2017, Musk said that he pushed his Tesla engineers to look into integrating solar cells on Model 3, but they concluded that it wasn’t worth it at the time.

Solar cell efficiency has since improved, and Tesla developed its own expertise in embedding solar cells through the development of solar roof tiles.

Now, Tesla’s design for the retractable bed cover with solar cells embedded was revealed in a patent application released today:

Tesla describes the system in the patent application:

In the patent application, Tesla released a few drawings that demonstrate how the cover rolls into the truck:

This is impressive considering it’s apparently strong enough for someone to stand on the cover.

Tesla also explains that it can embed solar cells in the tonneau cover:

The solar cells will apparently be an option on the Cybertruck, according to Musk.

This is a really cool design. I am glad that the patent application shows how it rolls into the truck. That’s awesome.

Shoutout to Arvind Pattabhiraman, Jared Migdal, Paul Venhovens, Greg Peer, Dhruv Kapoor, and Alan Clarke, who are all credited for the invention in the patent application.

This is great design and engineering.