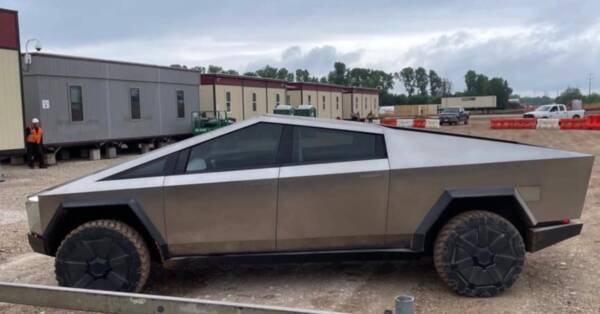 We are getting our first new sighting of a Tesla Cybertruck prototype in a long time as the electric pickup has just been spotted at its upcoming home of Gigafactory Texas.

Tesla unveiled the Cybertruck back in 2019 and only had one known prototype of the electric pickup.

Over the few months following the unveiling, the prototype was spotted only on a rare few occasions.

CEO Elon Musk was seen driving it to a restaurant in Los Angeles.

He also showed the prototype to Jay Leno in early 2020.

It was displayed at the Petersen Museum in June 2020 and at Tesla’s Battery Day in September, but that’s about it.

We haven’t seen a Cybertruck prototype for over 6 months and during that time, Tesla supposedly has refined the design before bringing the vehicle to production.

Now a Tesla Cybertruck prototype has been spotted at Gigafactory Texas in Austin:

At first glance, there’s no visible difference with the original design and it could very well be the same prototype displayed before.

While the automaker scrapped plans for a smaller Cybertruck for the time being, some modifications to the design and dimensions are expected.

The updated version of the Cybertruck was first supposed to be unveiled late last year, but it has been delayed.

Last month, Musk said that it will likely be unveiled next quarter (April-June) and when asked about what to expect from the update, he said that there will be “no handles”.

This prototype spotted at Gigafactory Texas has door handles and again, it’s likely not the final design.

The CEO has been saying that Tesla is now focused on its plan to bring the Cybertruck to production, which is going to happen at Gigafactory Texas.

The Cybertruck wasn’t the only important visitor at the construction site as Musk also arrived in Austin yesterday, according to its plane tracker.

Tesla’s official timeline for the start of Cybertruck production is late 2021, but the CEO has warned that Tesla is facing some significant challenges in bringing the vehicle to production and we wouldn’t be surprised to see the timeline slip to next year.

The electric pickup is built using a exoskeleton body instead a traditional vehicle body with panels.