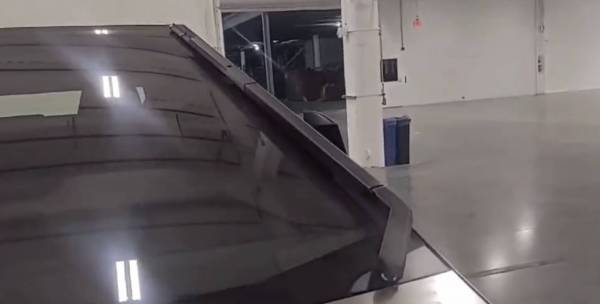 After a few pictures leaked this weekend, we now have a full video walkaround of Tesla’s latest Cybertruck prototype.

As we previously reported, some pictures of the latest Tesla Cybertruck have leaked this weekend. It appears to be from Gigafactory Texas, where the automaker plans to build the electric pickup truck late this year. The pictures gave us a better look at the lack of door handles as well as the new wheels without any aero cover on.

But now, a video of the same Cybertruck prototype was released and it gives us an even closer look at the truck. The video appears to have been filmed by contractors or new employees at Gigafactory Texas, based on the commentary on the video that was shared on Facebook:

The prototype appears similar to the one spotted on the test track at Fremont factory last month. It features the same design changes in the front and the giant wiper, which CEO Elon Musk said won’t be the one on the production version.

Here’s a closer look at that giant wiper from the new video:

The previous video of the Cybertruck prototype was from a drone flyover.

In this new video, we can see people standing around the car, giving the impression that it might be smaller than the original prototype, but that’s hard to confirm.

It still looks pretty big to me, and the design can be deceiving in terms of size. The video also gives us a good look at the bed with the tonneau cover opened or missing:

The Tesla Cybertruck is supposed to have an automatically retractable bed cover and Musk said that the automaker also planned to offer a solar power option on the cover. As noted in our post about the leaked pictures, it shows that the Cybertruck prototype doesn’t have door handles.

That’s something Musk previously confirmed about the updated design, but he didn’t say the doors would open – they are expected to open automatically when detecting the owner approaching as the original Model X front door did, but that is still unconfirmed.

Tesla is expected to give an official update on the Cybertruck program on Wednesday during its earnings report.