Tesla Cybertruck is equipped with a camera under front bumper 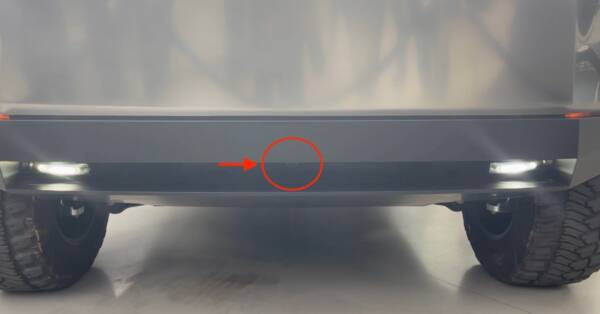 The latest outing of the Tesla Cybertruck revealed that the electric pickup truck is equipped with a camera under the front bumper.

Tesla’s Cybertruck prototype hasn’t had a lot of public outings, but we seem to learn a little bit about the electric pickup truck every time there’s a new one.

Last summer, the prototype was displayed at the Petersen Museum in Los Angeles, and Electrek had a very close look at it. We posted an extensive gallery of pictures from the showcase.

It gave us our closest look at the impressive electric vehicle that Tesla aims to bring to production by the end of the year.

For example, we got a good look at Tesla’s implementation of side cameras in the trims around the wheel wells in the front:

Now, with the new outing at Tesla’s store in New York City, people have spotted another interesting camera on the Cybertruck prototype.

De Paul Sunny caught the camera located under the front bumper of the Cybertruck (via @depaulsunny):

The camera could be used for off-roading, which is not uncommon in vehicles geared for the activity.

Tesla didn’t necessarily make off-roading a focus for the Cybertruck, but it will certainly be capable.

The automaker announced an up to 35-degree approach angle, a 28-degree departure angle, and up to 16 inches of ground clearance.

A camera with that angle can be useful for some rock crawling situations.

It could also be used for other purposes like parking assist and even potentially a 360-degree birds eye view.

Tesla aims to bring the Cybertruck to market by the end of the year – though CEO Elon Musk has also set the stage for a potential delay into 2022.

We are also expecting the unveiling of an updated version of the Tesla Cybertruck in the coming months.

It should look very similar to the current prototypes with a few refinements and apparently have no door handles.