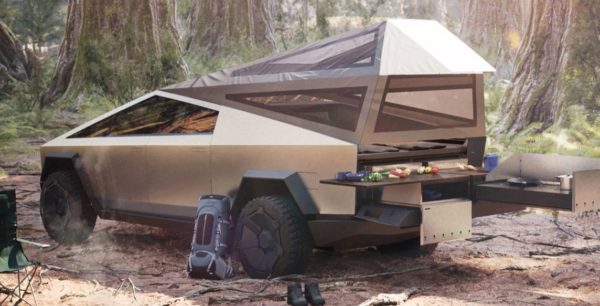 Based on the specs announced with the prototype, Tesla has delivered on both counts.

When it comes to functionality, Tesla Cybertruck has up to 14,000 lbs of towing capacity, 3,500 lbs of payload capacity, and 100 cubic feet of storage:

With up to 3,500 pounds of payload capacity and adjustable air suspension, Cybertruck is the most powerful tool we have ever built, engineered with 100 cubic feet of exterior, lockable storage — including a magic tonneau cover that is strong enough to stand on.

People at the Tesla Truck Club thought of a concept to make the storage space even bigger:

It would be great if the Cybertruck's rear window could roll down into the rear wall and then the whole wall fold in on top of folded rear seats.

Perfect for camping when Tonneau is closed, and for carrying things longer than 8’ @elonmusk pic.twitter.com/bzrEkfH6QX

They want to make the electric truck’s rear window rollable into the rear panel and make that panel foldable in order to increase the storage space of the bed.

It would help carry longer items — although Musk already confirmed that Tesla Cybertruck will have a “flip stop” feature on its tailgate in order to fit anything up to a 4 x 8-foot sheet of plywood.

Nonetheless, Tesla’s CEO responded that the idea is “worth considering”:

They also noted that it would be useful for camping since Tesla already unveiled a camper add-on system for the Cybertruck:

With the back opened, you can run the HVAC system to the bed and have a toasty or cool sleeping environment.

Those two electric trucks will have between 300 and 500 miles of range, be equipped with dual- and tri-motor powertrains, and start at $49,000.

A cheaper and lower range version of the Tesla Cybertruck that should start at just $40,000 is going to be available later.

Tesla said that the electric pickup truck is going to have accessories available at launch, including the Cyberquad and this camper setup.