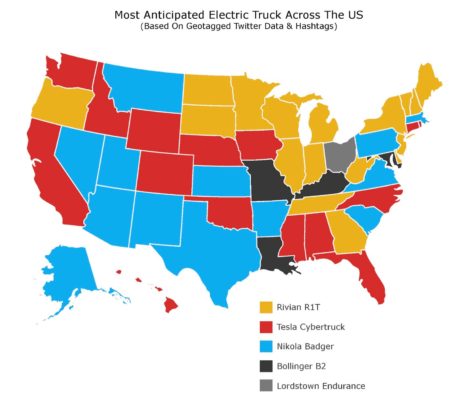 Tesla Cybertruck and Rivian R1T are neck and neck in electric pickup demand with some interesting other models trailing not too far behind, according to a new Twitter survey.

If everyone sticks to their timelines, which is unlikely, there are going to be about half a dozen electric pickup trucks on the market by the end of next year.

Pickup trucks represent the biggest vehicle segment in the US and it might end up being the segment to be electrified the quickest with this massive infusion of new electric models.

Everyone has their favorite and using geotagged data from Twitter, partcatalog.com built a map showing the most anticipated electric truck in every state.

They said about the methodology:

“The map is based on geotagged Twitter data in the last month, tracking tweets and hashtags about electric trucks in every state, including the models most mentioned. Over 90,000 tweets were tracked.”

Here’s the map in question:

The Tesla Cybertruck and the Rivian R1T are neck and neck in the total number of states secured, but Tesla got away with California, which is the most important state in terms of population.

Rivian has been taking reservations for the R1T electric pickup truck since November 2018, but it has never disclosed the number of reservation holders who all had to put up a $1,000 deposit.

As for Tesla, the automaker claimed over 200,000 reservations within the first week of taking orders and the latest tally put reservations at over 650,000 over the last 9 months.

However, Tesla has been asking for only a $100 deposit for Cybertruck reservations.

I’d take this data with a grain of salt.

Based on my own gut feeling, it seems to mostly make sense, but there are a few things that don’t sit well.

For example, how on earth would the Nikola Badger, a vehicle that only exists in renders so far — and made by a very questionable company — secure 13 states, including big ones like Texas and Nevada?

I think the data has been skewed by the fact that it was gathered over the last month and the Badger was unveiled right before that.

Lordstown’s Endurance electric pickup made the list, but only in Ohio, where it is being built so that’s not too surprising.

Bollinger’s B2 securing 4 states is more surprising in my opinion. I like the truck and unlike Nikola, they had a working prototype for a while now, but it is significantly more expensive than the competition.

The Ford F150 Electric didn’t even made the list, but that’s not too surprising to me.

Ford hasn’t released a lot of information about the truck and while it is expected around the same time as the Cybertruck and R1T, I don’t think it will gain more mindshare until the automaker opens up about the program.