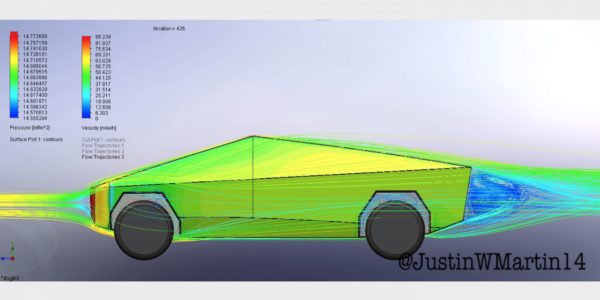 Last week we covered how the Tesla Cybertruck’s aerodynamics might be better than its boxy shape suggests, and today Tesla CEO Elon Musk responded to the numbers and suggested that the Cybertruck could get a Cd (drag coefficient) as low as .3 – quite impressive for a pickup truck.

In the last post, we went over some CFD (computational fluid dynamics) modeling of the Cybertruck done by aerospace engineer Justin Martin.  His model wasn’t complete – it didn’t model wheels (a large source of drag) and ignored the fenders because Martin couldn’t get accurate enough measurements.  But it got the basic proportions of the truck right, from whatever public information Martin could find.

Martin also decided not to share Cd number because of the assumptions he had to make in the model.  And because the Cybertruck currently doesn’t have side mirrors, which can be rather draggy.

But now, responding to an article which used the same modeling as ours, Musk has shared a number, and says that the truck could reach a Cd as low as .3 with enough engineering effort:

With extreme effort, Cybertruck might hit a 0.30 drag coefficient, which would be insane for a truck. Requires tweaking many small details. https://t.co/IMLJbsInmq

In the previous post, I mentioned that Cd isn’t everything.  To understand the total drag force coming off of a car, you need to multiply the Cd by the frontal area of the vehicle.  This tells us how much force is acting against the car’s forward motion, which is how much energy gets lost aerodynamically.

Also, Cd isn’t just a measure of “how well-designed a car is.”  High Cd isn’t necessarily bad – it’s just bad for efficiency.  Some of the least aerodynamic cars are also the fastest – Formula One cars often have Cds of .7 to 1.0  This is because they purposefully push air upwards to create downforce, which increases grip and allows them to go around corners faster.

But for road cars, which are interested in efficiency, then you want to have the lowest Cd you can get, most of the time.  This is especially true for electric cars which want to maximize the range they can get out of heavy and relatively expensive batteries.  Electric cars do have some benefits here, as it’s easier to package batteries and motors in a way that allows smooth airflow (for example, a flat underbody).

Comparing to other cars in the range of .3, the Tesla Cybertruck has aerodynamics similar to a lot of sleek sportscars – but also a few minivans.

On the worse side, you’ve got bricks like the Hummer H2 with a Cd of .57 or the VW Westfalia Camper at .51.  Some more efficient cars like the the Honda Civic are in the .36-.30 range, depending on model year.  A lot of sportscars are around .30 or .29, like Corvettes and the NSX.  And you’ve got some SUVs and minivans in that general area, like the Toyota Sequoia at .35, RAV4 at .31 and Toyota Sienna at .30.

Below .30 you start seeing more modern vehicles and ones that are specifically engineered to be hyper-efficient, like Tesla’s other vehicles (X is .25, S is .24, 3 is .23) and various hybrids like the Prius, Ioniq and Insight.  And the all-time winners are the teardrop-shaped EV1 and VW XL1 at .19.

Other trucks are typically in the high .3 range, like the Tacoma at .39.

So, as seen in the CFD modeling in the previous post, the Cybertruck does seem to be a lot more aerodynamic than the competition.

That said, Tesla still has work to do.  The design is not finalized and the car does have some pain points – like the rough A-pillars, the large front bumper and the peak at the top of the roof.  But it seems likely that it will be the most efficient pickup truck on the market when it does hit the market – and the most aerodynamically efficient as well.