Tesla all but confirms Cybertruck production delay until 2022 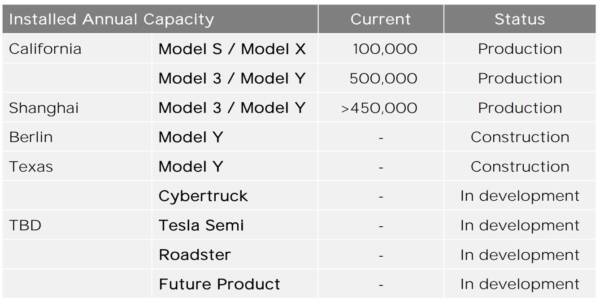 Tesla has all but confirmed that Cybertruck production is going to be delayed into next year.

After unveiling the Cybertruck in 2019, Tesla said that the electric pickup truck would make it to market by the end of 2021.

The automaker has not officially updated that timeline since.

With that deadline being only months aways and only very little evidence of progress toward production, Tesla was asked twice during the release of its earnings results about Cybertruck production, and the company spokespersons mostly danced around the question.

In its shareholders letter, the automaker mentioned “progress” toward production, but it

only wants to confirm that Cybertruck production is coming after Model Y production at Gigafactory Texas, which is planned to start “by the end of the year.”

We are also making progress on the industrialization of Cybertruck, which is currently planned for Austin production subsequent to Model Y.

In the same document, Tesla updates a chart quarterly about its vehicle production capacity, and it still only mentions the Cybertruck production as “in development” rather than “construction”:

This is confirmed by drone flyovers of Gigafactory Texas, which shows a lot of work happening inside of the Model Y section of the factory under construction, while the Cybertruck section appears to still be mostly empty inside.

During a conference call following the release of Tesla’s Q2 results, the automaker was asked directly about the status of Cybertruck production.

In one question, Tesla was even asked if it could “confirm” that production is still planned for this year, and it couldn’t do it.

Cybertruck is at a stage where we finished basic engineering of the architecture of the vehicle. With the Cybertruck, we are redefining how a vehicle is being made. As Elon said, it carries much of the structural pack and large casting design of the Model Y being built in Berlin and Austin. Obviously, those take priority over the Cybertruck, but we are moving into the beta phases of Cybertruck later this year and we will be looking to ramp up production at Giga Texas after Model Y is up and running.

He stopped short of confirming that production isn’t going to start until next year, but if the automaker is still in the alpha stage of the program and it is waiting for Model Y to reach volume production, it sounds unlikely that we will see the electric pickup truck this year.

CEO Elon Musk was also asked about whether or not he expects challenges in bringing the Cybertruck to production, and he said that he believes the Cybertruck might be Tesla’s best product yet, but also the most difficult.

While Tesla clearly appears hesitant in officially delaying the Cybertruck, I think it’s better if we forget about any chances of seeing the electric truck this year.

Otherwise, I think we are setting ourselves up for disappointment.

On top of Tesla deploying the production capacity itself, it looks like 4680 battery cells are going to be an important bottleneck into at least some time next year.

Musk even revealed during the call that Tesla has a backup plan to use 2170 cells in the new Model Y to be produced at Gigafactory Texas and Berlin until the 4680 is available and can enable the structural battery pack architecture.

I don’t think Tesla can do that with the Cybertruck and still achieve its promised specs and prices.