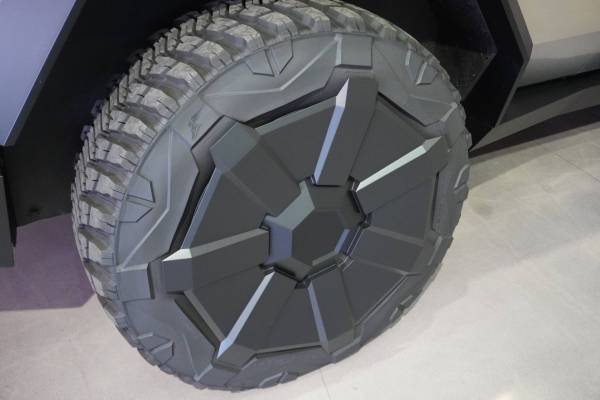 A couple of new photos leaked over the weekend of the Tesla Cybertruck, giving us a closer look at design changes that we’ve spotted recently from afar.

The photos were posted to Cybertruck Owners’ Club forum and have inspired quite a reaction so far.

The same… er, “unconventional” look of the original prototype is maintained, with large flat body panels, sharp angles, and a massive windshield. But there have been a few notable changes between the original unveiling and now.

The rims are perhaps the most notable change that we haven’t seen before. In the recent drone video of the Cybertruck driving around Tesla’s test track in Fremont, the wheels looked different than these photos today.

And those wheels were, in turn, different from the original prototype, which had a large plastic wheel cover that improves vehicle aerodynamics and also added to the vehicle’s blocky and aggressive look:

These new rims look similar in design to the Model 3 standard wheels with removed aero covers. Zooming in closer to the new photo, we see that the tires have the same design as the Cybertruck prototype with seven “spokes” corresponding to the seven ridges on the original prototype wheel covers. As such, we suspect that these rims were hiding underneath the wheel covers all along, and that the Cybertruck will have removable wheel covers like the Model 3 and Model Y base wheels.

On the original prototype, there was no windshield wiper or side mirrors – this is common on concept vehicles that are not intended to be driven on normal roads.

Car designers for years have been imagining a future where side mirrors are replaced by cameras, which allow for a cleaner design and better aerodynamics, but this dream has clashed with safety regulators who aren’t quite ready for it yet. Tesla would like to ship the Cybertruck without side mirrors, and has designed them to be “easy to remove” should regulations be updated to allow cameras instead of mirrors.

The massive front windshield requires an equally massive windshield wiper, which we get a closer look at in these leaked photos – one huge blade on the driver’s side of the windshield, which looks to extend across the entire windshield in one large sweep. Tesla has been designing their own electromagnetic wiper system, which is rumored to appear on the Cybertruck.

Another thing missing from this new prototype are the door handles. In previous iterations, the Cybertruck had flat but visible door handles that would “present” as in the original Model S, but Tesla confirmed since then that the production version will have no door handles at all. The car instead will recognize you walking up and open the door for you. Tesla seems to be following through with that idea, as there’s no hint of a door handle in these photos.

As for changes to the overall proportions of the vehicle, given that we only have two photos from one angle, it’s hard to tell if there are any differences. A lot of apparent changes could just be perspective or lighting tricks, so we can’t be authoritative here, but, it does look like the front end has changed a little bit.

In the original prototype, the front end was more angular and the front edge above the headlights jutted out a bit, even beyond the bumper. This was immediately pointed out by many as a big no-no, since safety regulations require that vehicles be designed to minimize pedestrian injury in a crash, and a high pointy bumper would probably not do that.

It looks like, in these new photos, the top edge of the headlights has been brought back slightly, and the plastic bumper underneath has been made larger (including larger air intake) and to jut out a little farther. Again, it could just be a trick of perspective, but if there has been a change, it was likely done to get closer to satisfying pedestrian safety regulations.

Update: After this post, a walkaround video leaked and it looks like, while the lower bumper area has been made larger, the headlight still does stick out beyond the plane of the bumper. Thus, we still suspect this area will be subject to some redesign before the car is homologated.

But the same basic design of the Cybertruck is still there. For those who have been eagerly awaiting this truck for years now, it will be refreshing that the original shape of the concept has been largely maintained. But for me, well, I still find it hideous. I was told it would grow on me, and I said I knew it wouldn’t, and it just hasn’t. But that’s just me, and I’m not in the market for one anyway.

I still do respect the idea of doing something different, and perhaps the manufacturing cost savings from a simpler design will turn out to be beneficial, but I’d still never want to be seen driving one myself. Luckily there are many other electric truck options available now or soon for prospective buyers depending on how radical your aesthetic tastes tend to skew – the F-150 Lightning, Silverado EV, Rivian and Hummer EV, roughly in that order.

How about you? What do you think about these new design changes? Let us know in the comments.