Here are the states hit hardest by coronavirus scams 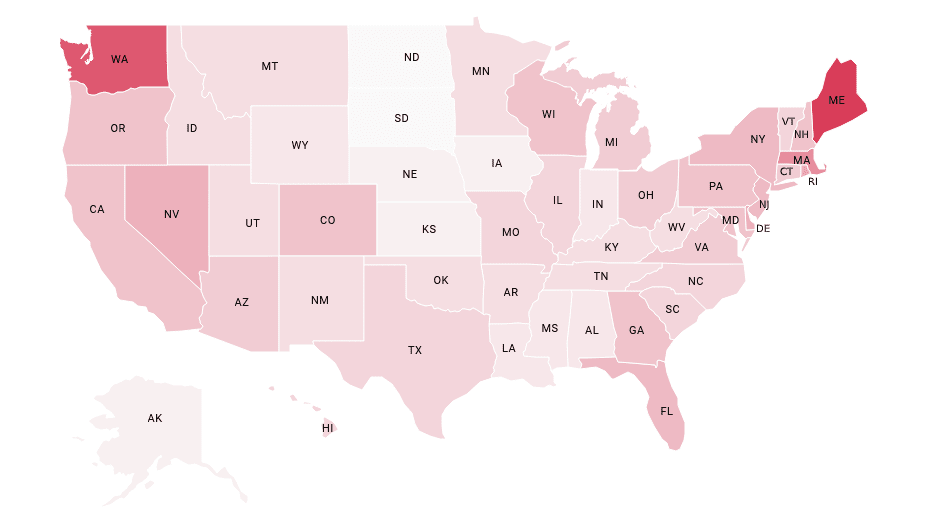 Americans have lost nearly $50 million in scams and fraud schemes related to the coronavirus pandemic since the beginning of the year, according to the Federal Trade Commission.

The agency has received over 67,800 complaints regarding fraud schemes related to Covid-19 from consumers, with about 46% saying they lost money in a scam. On average, victims lose about $450.

Some states have been more affected by these scams than others. Using data published by the Federal Trade Commission through June 9, 2020 and 2019 population estimates from U.S. Census Bureau, CNBC Make It calculated the states and jurisdictions with the highest levels of fraud complaints related to Covid-19 per 100,000 residents. Below are the five states with the highest level of fraud complaints. On a per-capita basis, the District of Columbia would rank third.

Tracking which states are experiencing coronavirus-related scams isn't about looking at states with the most confirmed Covid-19 cases. Instead, it's about following where the government stimlus and relief money is going, says James Lee, chief operating officer of the Identity Theft Resource Center.

Fraudsters tend to target states that have seen high levels of relief from the federal government, such as stimulus checks and loans administered by the Small Business Administration, as well as states with generous unemployment benefits, Lee says. "We're literally pumping trillions of dollars into the economy. That's unusual and the bad guys know that."

Many states also needed to get a massive amount of unemployment benefits out the door quickly, so they set aside many of the normal verification processes and procedures, opening the door to fraud, Lee says. Typically, a state unemployment agency verifies an applicant's information, contacts the employer to determine the reasons for unemployment and then makes an eligibility determination. But some states are streamlining the process, cutting down the number of pages and questions that applicants need to answer and making it easier for employers to verify employment to get benefits to Americans who need it as soon as possible.

Maine's Department of Labor reported on June 11 that it had received over 17,000 reports of unemployment identity fraud this year. So far, the state's Labor Department says it has canceled about $13 million in benefits filed by 2,200 users after flagging them as fraudulent and is reviewing another 14,700 claims worth about $49 million.

Washington state has also seen an unprecedented level of identity theft to claim unemployment benefits, Lee says. State officials identified at least $1.6 million in fraudulent claims in April. "This is happening because bad actors have acquired people's personal information through other data breaches outside of the agency. Criminals then use this information to fraudulently apply for unemployment benefits in someone else's name," Suzi LeVine, Washington's Employment Security Department commissioner, said in a statement.

The number of complaints related to coronavirus fraud in each state

How to protect yourself from Covid-19 scams

Consumers need to be extra vigilant right now, which includes taking steps to protect yourself. Don't give credit card or other personal information to anyone over the phone, don't click on unknown links in emails and don't even answer the door for someone claiming to be from the government unless they can show proper identification. Assume it's a scam until someone proves otherwise.

Beyond those common safeguards, here are a few additional steps you can take to protect yourself against scams related to the coronavirus.

Many government agencies, including state unemployment divisions, have online portals where you can set up an account to start the process of receiving benefits. Even if you haven't applied for benefits, it might be worth logging onto your state's site and setting up an account. "You may not need it, you may not use it, but set it up because it will prevent someone else from doing it in your name and getting a benefit that you don't know about," Lee says.

The ITRC is investigating several cases where people did not apply for unemployment, but someone applied in their name and was able to successfully get benefits. That may not only have tax consequences, but may block you from applying in the future should the need arise. "In some cases, they don't find about it until years later," Lee says.

If you already have an account, it's a good idea to log in and double check that no one has accessed the account or submitted claims in your name, Lee says.

Many identity theft scams happening right now are done by fraudsters who have obtained log-in information from data breaches that have occurred within the past few years.

All the stolen data out there could easily allow somebody to pretend to be you, Lee says. When consumers received a notification that their information had been compromised in a data breach in the past, less than half changed their account password. But it's an important step to take because it shuts down access.

"It's inconvenient. It's a pain, but you've got to do it," Lee says. And don't just use a new password across the board. Lee recommends creating a unique pass phrase on every account, such as the name of a song or a book title. "It's easy to remember," he says.

The longer and more complex you can make it, the more secure it is. A scammer using encryption tools to hack their way in your account can probably figure out a six-character password that only uses letters in a matter of seconds, Lee says. But it will take decades to crack a 12-character pass phrase that uses letters and numbers.

3. Use multiple verification safeguards for accounts

Even if you're using a secure pass phrase as your log in, Lee also recommends enabling two-factor authentication if it's available. This generally requires you to not only enter a password, but also confirm your identity by logging onto your phone or entering a code texted or emailed to you.

Illegal robocalls are being used to pitch consumers everything from low-priced health insurance to Covid-19 "cures" to work-from-home schemes, the FTC says. So it pays to be careful when picking up the phone.

To make it easier to avoid harmful robocalls, most mobile service providers, including the "Big Four" — AT&T, Sprint, T-Mobile and Verizon — have free software or apps that allow you to screen or block automated calls. Some, like Verizon, have software that automatically blocks some of the worst robocalls throughout their network, while others have separate options that consumers can install.

Better yet, just don't respond to unknown text messages or pick up calls from unfamiliar phone numbers. Instead, let them roll into voicemail for further scrutiny. "As with all unknown or unexpected robocalls, it's buyer beware. We recommend consumers ignore them," says Alex Quilici, CEO of YouMail, a company that tracks robocalls.

It's important that consumers stay up-to-date on the latest ways scammers are trying to swindle them. The FTC has been keeping on top of the latest schemes and issuing consumer alerts about what they're finding. You can sign up for the emails or simply visit the FTC's coronavirus scam page.

Credit building company Self Financial also created a comprehensive list of all the scams connected to Covid-19 and how they work. The list is updated weekly based on information from the FTC, Federal Drug Administration, the Better Business Bureau and other outside sources.

Don't miss: Debt collectors are leveraging the court system more than ever—and this may have significant consequences for Americans