Elon Musk teases Tesla Cybertruck update: ‘There will be no handle’ 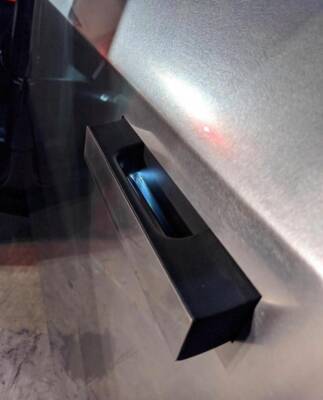 Tesla is due to unveil the updated version of its Cybertruck, and Elon Musk decided to give a small teaser today: “There will be no handle.”

The automaker unveiled the Cybertruck in November 2019, but the vehicle wasn’t expected to enter production until late 2021.

Over the last year since the unveiling and leading up to the start of production, Tesla has been modifying the electric pickup truck.

Unlike most automakers who unveil concept vehicles and later production versions that are extremely toned down, Tesla tends to bring production vehicles to market that closely resemble their original concepts.

However, the automaker still makes refinements and modifications on the road to production, and the Cybertruck is no exception.

CEO Elon Musk previously talked about Tesla updating the Cybertruck’s adaptive air suspension. They also talked about making the truck smaller, but Musk scrapped that plan after a design review in May 2020.

While the automaker scrapped plans for a smaller Cybertruck for the time being, some modifications to the design and dimensions are expected.

The updated version of the Cybertruck was first supposed to be unveiled late last year, but it has been delayed.

Earlier this month, Musk said that it will likely be unveiled next quarter.

Today, the CEO was asked to tease something about the updated version of the Tesla Cybertruck and he responded:

Musk appears to be saying that the new version of the Cybertruck will not be equipped with any door handles.

The original Cybertruck prototype was equipped with the same door handles found on the original Model S:

When driving, they stay flush to the vehicle’s body, but they present themselves when someone with a key approaches the vehicle or if you push on them and the vehicle is unlocked.

It’s unclear what Tesla is planning to do instead, but the automaker has been working on self-opening and closing doors since the Model X back in 2015.

Such a technology can technically replace doors handles altogether.

What do you think? Let us know in the comment section below.