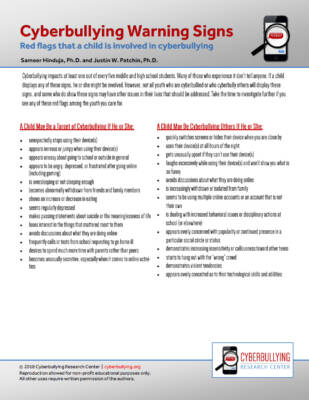 Cyberbullying impacts at least one out of every five middle and high school students. Many of those who experience it don’t tell anyone. If a child displays any of these signs, he or she might be involved. However, not all youth who are cyberbullied or who cyberbully others will display these signs, and some who do show these signs may have other issues in their lives that should be addressed. Take the time to investigate further if you see any of these red flags among the youth you care for.

A Child May Be a Target of Cyberbullying If He or She:
-unexpectedly stops using their device(s)
-appears nervous or jumpy when using their device(s)
-appears uneasy about going to school or outside in general
-appears to be angry, depressed, or frustrated after going online (including gaming)
-is oversleeping or not sleeping enough
-becomes abnormally withdrawn from friends and family members
-shows an increase or decrease in eating
-seems regularly depressed
-makes passing statements about suicide or the meaninglessness of life
-loses interest in the things that mattered most to them
-avoids discussions about what they are doing online
-frequently calls or texts from school requesting to go home ill
-desires to spend much more time with parents rather than peers
-becomes unusually secretive, especially when it comes to online activities

A Child May Be Cyberbullying Others If He or She:
-quickly switches screens or hides their device when you are close by
-uses their device(s) at all hours of the night
-gets unusually upset if they can’t use their device(s)
-laughs excessively while using their device(s) and won’t show you what is so funny
-avoids discussions about what they are doing online
-is increasingly withdrawn or isolated from family
-seems to be using multiple online accounts or an account that is not their own
-is dealing with increased behavioral issues or disciplinary actions at school (or elsewhere)
-appears overly concerned with popularity or continued presence in a particular social circle or status
-demonstrates increasing insensitivity or callousness toward other teens
-starts to hang out with the “wrong” crowd
-demonstrates violent tendencies
-appears overly conceited as to their technological skills and abilities