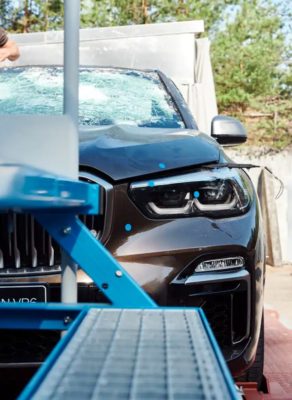 Tesla Cybertruck is starting to grab the attention of the competition — even if it’s just to take a few shots at the electric pickup truck. BMW couldn’t resist the opportunity as they release their new bulletproof SUV.

When unveiling the Cybertruck last week, Tesla made some claims about the electric pickup truck being bulletproof to a degree with its stainless steel body and “Tesla Armor Glass.”

However, the demonstration didn’t go exactly as planned, and steel balls thrown at the truck’s windows during the live presentation ended up cracking the “Tesla Armor Glass.”

It resulted in a lot of memes and jokes about Tesla’s Cybertruck, but Elon Musk seemed to have a pretty good explanation for the window problem that happened during the event.

But some are still poking fun at Tesla for the incident.

When launching an armored version of its BMW X5 SUV the next day, BMW took a shot at Tesla:

Comes with bulletproof windows and offers splinter protection in case it gets hit by a metal ball: The new BMW X5 Protection VR6: https://t.co/XnMPixFvRx

“In case it gets hit by a metal ball” seems to be in reference to the Tesla Cybertruck event.

BMW implies that its bulletproof vehicle is better suited to withstand attacks, and to be fair, they seem to have tested it with a bunch of different calibers:

The two vehicles have little in common other than both claiming they are bulletproof. One is a premium gasoline-powered SUV, and the other a rugged electric pickup truck.

I think that’s fair game, but at the same time, BMW and other manufacturers need to take the Cybertruck seriously.

The vehicle represents a bold statement about being willing to bring radical new designs to production that were previously limited to concept vehicles.

If successful, the Cybertruck could change the entire industry and drag it into the future. If that happens, no one will care about a little snafu during a live demonstration.

Also, BMW isn’t the only one poking fun. Lego:

The evolution of the truck is here. Guaranteed shatterproof 😬 pic.twitter.com/RocTEkzzwI