2019 was a record year for OSS vulnerabilities

Total vulnerabilities in OSS more than doubled in 2019 from 421 Common Vulnerabilities and Exposures (CVEs) in 2018 to 968 last year, according to a RiskSense report.

The study also revealed that it takes a very long time for OSS vulnerabilities to be added to the National Vulnerability Database (NVD), averaging 54 days between public disclosure and inclusion in the NVD. This delay can cause organizations to remain exposed to serious application security risks for almost two months.

These very long lags were seen across all severities including vulnerabilities rated as ‘Critical’ and those that were weaponized, meaning those where an exploit is present in the wild.

“While open source code is often considered more secure than commercial software since it undergoes crowdsourced reviews to find problems, this study illustrates that OSS vulnerabilities are on the rise and may be a blindspot for many organizations,” said Srinivas Mukkamala, CEO of RiskSense.

“Since open source is used and reused everywhere today, when vulnerabilities are found, they can have incredibly far-reaching consequences.”

The number of published open source CVEs more than doubled compared to any previous year. Vulnerabilities increased 130% between 2018 and 2019 (from 421 to 968 CVEs), and was 127% higher than 2017 (435). This increase does not appear to be a flash in the pan since the number of new CVEs has remained at historically high levels through the first three months of 2020.

Vulnerabilities in open source software are taking an extremely long time to be added to the U.S. NVD. The average time between the first public disclosure of a vulnerability and its addition to the NVD was 54 days.

Jenkins & MySQL have the most vulnerabilities

The Jenkins automation server had the most CVEs overall with 646 and was closely followed by MySQL with 624. These two OSS projects also tied for the most weaponized vulnerabilities (those for which exploit code exists) with 15 each.

By contrast, HashiCorp’s Vagrant only had 9 total CVEs, but 6 of them were weaponized, making it one of the most weaponized open source projects in terms of percentage. Meanwhile, Apache Tomcat, Magento, Kubernetes, Elasticsearch, and JBoss all had vulnerabilities that were trending or popular in real-world attacks. 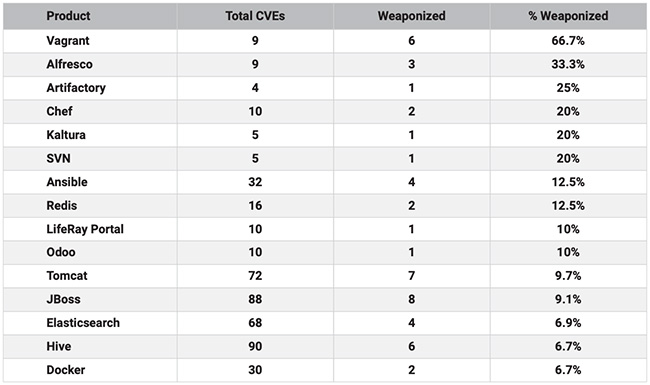 Projects by percent of weaponized CVEs

Rare does not equal less dangerous

The fact that these issues are rare in OSS is a positive sign for the security of open source code, but also serves as a reminder that when problems do arise they can be attacked quite broadly.